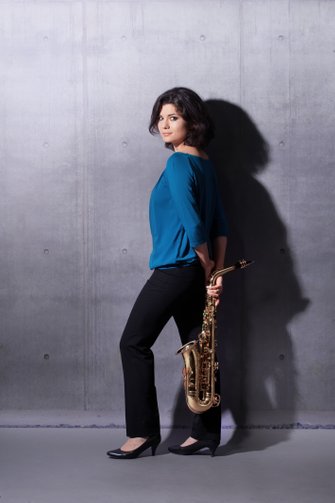 Magdalena Lapaj (Lapaj-Jagow), a classical saxophonist, was born in 1988 in Poznan, Poland. Since 2007 she has been living and working in Cologne. She started teaching the classical saxophone at the Musikhochschule Münster in 2019.

Already as a child Magdalena was fascinated by classical music. She started her adventure with music by playing the piano but soon afterwards the saxophone became the instrument of her choice. Motivated by her first teacher, Dorota Samsel, Magdalena Lapaj left for Berlin, where she met Detlef Bensmann and graduated from her junior studies at the Hanns Eisler School of Music Berlin.

In the years to follow, the young saxophonist continued her musical education in Cologne. Between 2007 and 2012, she studied classical saxophone at the Cologne University of Music under the supervision of Professor Daniel Gauthier, where she obtained her B.A. diploma in artistic education.

In the years 2010-2011, Paris became Magdalena's next destination. As an exchange student under the auspices of the Erasmus Scheme, she spent a semester at the Paris Conservatory, a prestigious college of music, where she was a student of Professor Claude Delangle. In 2015, the young artist graduated from the Cologne University of Music. The master's degree in music (specializing in solo saxophone) was the culmination of her collaboration with Sebastian Pottmeier.

During her studies, Magdalena was granted various scholarships financed by, among others, the Polish Ministry for Culture and National Heritage as well as the Foundation Gymnasial- und Stiftungsfonds in Cologne.

all competitions and prizes (pdf)

Magdalena is a devoted classical saxophonist, performing both as a solo artist and a chamber musician. In 2004, she made her debut with the Brandenburgisches Kammerorchester Berlin (Brandenburg Chamber Orchestra) under the direction of Rainer Johannes Kimstedt. In 2012, she played as the soloist with the Berlin Radio Symphony Orchestra under the direction of Frank Strobel.

Various concerts and festival invitations have brought Magdalena, both as a solo artist and a chamber musician, not only to close destinations Poland, Germany and France, but also to the Czech Republic, Sweden, South Korea, Turkey, Canada, USA and Switzerland.

The list of Magdalena’s guest performances is long: at the Festival “Eight Bridges – Music for Cologne”, the 17th World Saxophone Congress SAXOPEN in Strasbourg, the Beethovenfest (Beethoven Festival) in Bonn, the Chanterelle Festival in Poland, the “Music & Beyond” Festival in Ottawa, the Istanbul Music Festival, the New Music Forum at the Deutschlandfunk, the Organ Night in Münster, the Music Festival “The Stars of Tomorrow” in Koblenz, the Cologne Music Night, etc. Magdalena contributed to many radio productions, which were broadcasted among others on the WDR3 (West German Broadcasting), Deutschlandfunk and Arte TV.

As an orchestral musician, Magdalena has played among others with the Mecklenburgische Staatskapelle, the Orchestra of Poznan Philharmonic, the Junge Deutsche Philharmonie, the Stuttgart Radio Symphony Orchestra and the Beethoven Orchester Bonn.

Magdalena is a passionate chamber musician. She plays soprano saxophone in the Forseti Saxophone Quartet, which is supported by the association “Yehudi Menuhin Live Music Now” and celebrated its 10th anniversary in 2015. The Forseti Quartet is enchanting their audience not only with a highly interesting concert program, assembled from original works and newly arranged unknown masterpieces, but also through an entertaining moderation along the program. The CD “Reach Out” by the Forseti Quartet presents pieces of contemporary composers such as V. Dinescu, D. Fijikura, H. Thomalla and M. Steinhäuser; some of these works have been recorded for the first time.

In the years 2014-2016 Magdalena has also accompanied with her experience as an alto saxophonist the Alliage Quintet, which was twice awarded the ECHO Klassik. Playing with this ensemble gave Magdalena the unique opportunity to collaborate with such renowned musicians as singer Simone Kermes and the Hungarian violin virtuoso József Lendvay. Together with the Quintet Magdalena recorded the CD FANTASIA with the star clarinetist Sabine Meyer (released 2016 by Sony Classical).

Together with the Belgian soprano singer Sheva Tehoval, Magdalena founded the duo Tehoval/Lapaj, which focuses on new music and in 2014 won the 2nd prize the International Competition for Interpretation of Contemporary Music in Karlsruhe.  The two young musicians studied under the supervision of Barbara Maurer und Professor David Smeyers at the Cologne University of Music. The unusual combination of the saxophone and the human voice offers an absolutely novel sound experience and thus broadens the musical horizons.

The duo Lapaj/Sayfullayeva is dedicated both to music intended originally for the saxophone and the piano as well as to their own interpretations of classical masterpieces. The young musicians captivate the audience with perfect harmony and energetic interpretations, brilliantly put to a fascinating concert program.

Further information about studying the classical saxophone can be found on the website of the Musikhochschule Münster.

Magdalena Lapaj is keen to share her vast experience as a concert musician, her knowledge and last but not least also her joy for music with young talents. Therefore, she is offering tailor-made classes both for beginners and proficient player. Since 2011 she has been working as a saxophone instructor at the Music School Burscheid.